This is a final and last part of the Building Real time private chatting app using React. In this part, we will finish our application by adding the features listed below,

A little recap again, To integrate the real-time morality in our application, we connected our React application to Socket Server. Later we implemented the Realtime chat list for the application. On the server-side, we wrote the Socket Server Event to Emit the updated Chat List. And at the end, we Highlighted the selected user from the list of users.

The last thing we did in thethird partwas highlighting a selected user from the chat list to start a new chat. We will start our implementation from where we left in the last part. So let’s start the implementation,

Fetching the conversation between users

As the title reads Fetching the conversation between users, it seems very easy, right! All you have to do is make an HTTP call and you are done. Well, this is exactly what you are going to do but there is a little problem.

ChatList Component is a separate component and the Conversation Component will be a separate Component, which we will create in next few minutes. So here you have to pass data between two sibling component.

So first we will create Conversation Component and then we will display messages and do other things. As always I will divide this section’s explanation into smaller chunks and this way we will speed the development of this application.

Now yourConversation component is ready to use, So why wait let’s import it into Home component and see if it works!

Now you can add the <Conversation> into your Home.js file, and it should show the Conversation Component works! message. So at this point, your Home.jsfile should look like this.

It’s a general thinking that; when you click on any user from the chat list you would like to see the conversation between you and that user. In this section, I will explain how to pass the data from theChatlist component to theConversation component.
=>Since you have already written complete chat list code in the last part, hence here you don’t have to write anything.

In the below section we will catch the data sent from theChatlist component.

Here we are not going to use Redux or any state management libraries since the scope of the app is not that big. Here we will use plain Props and States to transfer data between components.

=>Create a new method called updateSelectedUser() in Home Component and add the below code in it.

=> Create a new property called selectedUser in the state object to hold the value of the selected user. Now the State object your Home Class should look like this,

=> Update the getChatBoxComponent() method as shown below,

Fetching the conversation between users from the server

In this section, we will make an HTTP call to fetch the conversation between the user from the server. So to do this, we will use thegetMessages()method. This method is defined inside theChatHttpServerclass.

So open the Conversation.jsand write down the below code. But first, add below two more properties inside the state object of theConversationComponent class.

Whenever the Conversation will receive the new user’s data it will call the HTTP service to fetch the conversation between two users. To achieve this we will use two Component Lifecycle methods getDerivedStateFromProps()andComponentDidUpdate() respectively.

Now to check the updated user’s data we will we are using getDerivedStateFromProps(), which update our state with updated data hence the component will rerender itself. Open the Conversation.jsand write down the below code.

Once the component will call the render() method, right after theComponentDidUpdate()method will execute. In this method, we will make an HTTP call to fetch the conversation between two users. Open the Conversation.jsand write down the below code.

Finally, IngetMessages()method of the class, we will consume theChatHttpServerclass. Once we will receive the new messages,getMessages()method will update the state and which will render the conversations between two users. Open the Conversation.jsand write down the below code.

Let’s write a Nodejs express Route to return the response when we try to fetch the response from/getMessagesroute. Open the routes.js and add the below route to it,

As you can see, we have calledgetMessagesRouteHandler()method to handle the request and response for this route. So as always, it will send an appropriate response based on the result from the database.

Open the route-handler.js and the below method into it,

Now let’s fetch data from database using MongoDB query. Here I expect from you that you are familiar with MongoDB queries.

Open the query-handler.js file and add the below method, this method will basically fetch the messages from the MongoDB.

Rendering the conversation as a chat messages

At this point, you have all the messages between two users in conversationproperty. The only thing is remaining now, is writing markup so that you can render messages.

=> Now open theconversation.jsand the below markup into the render() method.

=> If you have noticed we have used two new methods i.e. this.getMessageUI() and this.getInitiateConversationUI().

Now if you look at your screen you should see something similar to the below image, 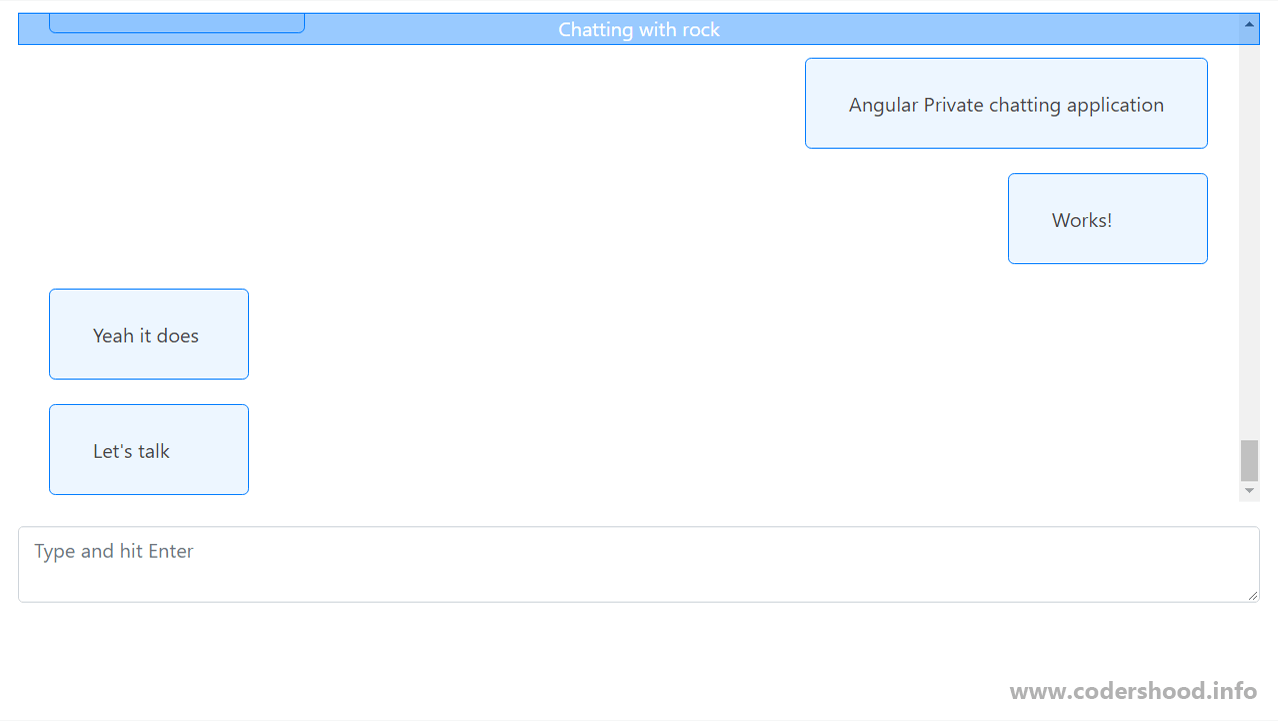 Finally! The last and the final puzzle of the application, here first we will send a message to the selected user from the chat list. And then, we will write a code to listen for the incoming messages from the server.

So let’s start with the markup open the conversation.jsand write the below code beneath thedivtag having.message-typerclass.

Here we don’t have too much to understand except keyup Event. In the keyup event, we will send the message to the server when the key code will be13.

In less technical terms when the user will press enter button we will send the message to the server.

=>We have defined the sendMessage() which will send the message to the server. So in the conversation.jsfile, add the below method,

All this work that we just did; is incomplete without writing the nodejs socket event. And also we need to save these messages in MongoDB.

The below socket event will listen to the socket event and based on the user’s id it will send messages to the recipients. Since it’s a socket event that we are emitting from Angular, So open the socket.js and ad the below code,

This part is damn so easy to implement. Here we will create a method to listen for the incoming socket events. After receiving the socket event, we will push the new messages in the conversationstate array.

=> So I have createdreceiveMessage()method inside the ChatSocketServerclass. This method will subscribe for the new incoming message from the socket server.

=> We will call this method from thecomponentDidMount()method.

=> Once you call this method, it will listen to the incoming messages and automatically push the new messages in the conversationstate array.

So open the conversation.js and add the below inside thecomponentDidMount()method.

Now let’s createreceiveSocketMessages()method and add the below code to it,

Small tip, in case, if you want to show notifications. For example, you received a new message from Shashank.

You can do that here.

Implementing Logout, yeah that the last thing is left to do. So here we will basically work only in HomeComponent Class. I really don’t need to give an overview of Logout functionality.

So let’s just hop into home.jsadd the below markup in the render() method, and make sure your header looks like below markup,

Now open the home.js and the below code. In this below, we will consume the ChatSocketServerto achieve this functionality.

Now the last part of the puzzle is socket event that will change the status from online to offline. So open the socket.js and add the below event to it.

If you are still with me from the start and you followed each and every step, then pat yourself on your back.
This series was too big, but I thought it was worth writing it. But the good thing is now you know, how to create a private chatting application in React with minimum complexity, for now, that’s the end of this series.

I highly recommend you guys to clone the source code from GitHub and try to relate to each and every point.

If you have any suggestions, question or feature requests, let me know in the below comment box, I would be happy to help. If you like this article, do spread a word about it and share it with others.